National Festival of the States 2016

The Lake Oswego Millennium Concert Band (LOMCB) represented the State of Oregon as a participant in the 2016 National Festival of the States in Washington, D. C. as part of the commemoration of the 75th anniversary of the attack on Pearl Harbor.  LOMCB traveled to Washington, D. C. in June, 2016 where band members performed concerts and participated in other events. 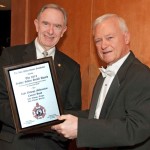 The purpose of the Sudler Silver Scroll Award is to identify, recognize and honor those community bands that have demonstrated particularly high standards of excellence in concert activities over several years.  In addition, the bands must have consistently selected and performed a high level of musical literature.

Dale Cleland, LOMCB Musical Director, and his wife, Rosemary, a trumpet player in LOMCB, traveled to Chicago to accept the recognition of the award.  The award was officially presented to Mr. Cleland and LOMCB by John Philip Sousa Foundation member Dr. Michael Burch-Pesses at LOMCB’s concert at Lakeridge High School Auditorium on February 23, 2014.

The Lake Oswego Millennium Concert Band (LOMCB) performed at the 35th Annual Convention of the Association of Concert Bands (ACB) on April 5, 2013 in San Ramon, California.  It was the first time since 1989 that the conference had been held on the west coast and it was truly an honor to be chosen to perform.